From the mid 1960's onwards, the era of steam driven ships or boats began to draw to a close, with most vessels in the U.K and around the World being sent to shipbreakers. Within 15 years commercially working steam engined ships had become more or less extinct.

Brent's survival is remarkable in that she was a pioneering preservation project, done at a time when little thought was given to saving steam boats of any age or design. Being only 25 years old when rescued she had little or no recognised heritage value, but as the majority of older tugs had already been scrapped, Brent was one of the last survivors of her kind.
Her new owners felt that she should be saved for posterity, the best way being by converting her into a family home and tug yacht. This new use for the Brent worked very well until due to the need of major repairs she was laid up in the 1990's. The vessel was given to the Trust in 2011.

Janet Hall who with her husband saved the Brent, outlines the story:

"This is a brief history of the 40 years in which Ron Hall and I, and I latterly alone, were the owners of the 'Steam Tug Brent', from May 1971to April 2011.
Ron was the registered owner of ‘Brent’ until his death in 2008, afterwhich it was registered under my name until transference of ownership to “Steam Tug Brent Trust” in March 2011.
Throughout our ownership ‘Brent’ has been kept on the River Blackwater at Maldon, in Essex.
For the first nine years of our married life Ron and I lived aboard the ‘Brent.’  We moved ashore in 1980, but during the 1980’s and early 1990’s we alternated, winter ashore, summer afloat with our young family.  From the mid 1990’s onwards, circumstances dictated that we were able to devote increasingly less time to the ‘Brent.’ Due to boiler concerns we did not raise steam after the mid 1990’s.

In the spring of 1971 Ron delivered a vessel to Peter Horlock’s ship breaker’s yard at Mistley.
Knowing Ron’s penchant for historic vessels, Peter said, “I’ve got just the thing for you,” and showed him the steam tug.  ‘Brent’ had been at the yard for 10 months, as yet unscathed by the cutting torch, but awaiting scrapping. Peter’s throw away remark set Ron thinking: Maybe she was just the thing for him.  At the time, we were not looking for such a project but when Ron returned home, he discussed with me the possibility of buying her; to live aboard, restore, maintain and run.

We spent several weekends in preparation; cleaning and sorting.  Ron and Ian Hiner, our Chief Engineer, familiarised themselves with the pipework, machinery and the workings of the boiler.  Prior to the weekend of 11th June, they raised steam and ran trials.  On the Friday evening the rest of the crew and I went to join them at Mistley, where ‘Brent’ lay at the quay gently hissing steam and exuding warmth. On that first evening we sat behind the wheelhouse experiencing that intrinsic atmosphere of a steam vessel with a hot boiler. At 3.00 a.m. we quietly left Mistley for the voyage home, arriving at Maldon some 12 hours later.

By the end of June we were living aboard.  We had to adapt the ‘Brent’ to enable her use as a home, but it was our aim to make as few major alterations as possible.  We took out her coal cooking range, but kept it, so that if wanted, it could be re-installed at a later date.
Much time was spent, in those early years of ownership, in smartening her up, removing asphalt from her decks, and chipping and painting.  Ron’s aim was to have the main engine running quietly and he and Ian spent many hours with the bearings apart and engineer’s blue.  Ron was also keen to improve the combustion; to achieve a light haze rather than the dense black cloud of our early steamings.  By 1973 ‘Brent’ was smart enough to win the award for ‘the best kept privately owned craft,’ at the Greenwich festival.

During the 1970‘s we made several trips to the London River, the most memorable being the PLA Clipper Regatta 1975.  We attended the Thames Barge, Kitty, who at that time did not have an engine.  After assisting her to round round at Tower Bridge and sail alongside her berth, we caught a turn on a lighter, which was on a mooring immediately below Tower Bridge to wait for the river to be less congested before returning to our allocated mooring down river.  However, since no one seemed to mind us lying there, we moored up securely and stayed there, in the midst of the tall ships, for the rest of the festivities.

At the Queen’s Silver Jubilee in 1977, ‘Brent’ took part on the Thames, lying near to Sir Walter Raleigh’s Steps above Greenwich.  Twenty five years previously she had towed the firework barge for the Coronation celebrations! Nearer to home we were often under way. We attended the first Colne Match and Working Boat Rally in 1971, and for many years ‘Brent’ was a Committee Boat and Ron, Officer of the Day for both the Blackwater Sailing Barge Match and the Colne Rally.

On two occasions we went further afield and made trips to The Netherlands. We crossed the North Sea to Ijmuiden and went through the North Sea Canal to Amsterdam. In 1979 we had a berth at The Kromhout Yard, a shipyard for traditional craft, and lay between two steam tugs, the ‘Roek’ and the ‘Rosalie.’  The Dutch people made us feel very welcome and we had many visitors, keen to see the English steam vessel.  We, later, left Amsterdam, went through to the Ijselmeer and to Enkhuizen, where we spent a few days before returning to England… We had to wait for good weather for the crossing.  All our crew had gone home by ferry, waiting to be called back when there was less wind. One morning there was a ‘window’ in the weather before the next low arrived, and so Ron, as engineer, Tom Baker, as skipper and I made the 29 hour passage home.

For a while we were members of the Dutch Steam Tug Association, Vereniging Stoomvaart  (Current membership 27 steam tugs!) and in 1984 we returned to The Netherlands to attend the Medemblik Steam Festival.  We stayed at Enkhuizen for a few days and then joined a flotilla of Dutch steam tugs to make the short passage from Enkhuizen to Medemblik.  The festival was a grand affair with a large steam fair in the main thoroughfare and much steam activity in the harbour. We lay between the ‘S.T. Schelenkuhlen’ and ‘S.T. Nordzee.’  We maintained contact with the crews of these two vessels, some of whom came as crew for our return trip home.

Our second trip to the Netherlands was very different from the first.  We had our two children on board; Amelia, aged 4, and Jacob, 21 months.  Also the lives of our original crew had diverged and new, less permanent crew had joined us.

Janet and Ron Hall with their children.
Our activities with the ‘Brent’ and our programmes of work altered.  We made fewer trips, our last major trips being in the 1980’s; a trip to London, where we lay at Tower Pier and a trip to Chatham Dockyard for a steam festival.  We continued throughout the 80’s and early 90’s to take the ‘Brent’ to the mudflats at Goldhanger in the summer for the painting of her hull.

There were many factors which curtailed our use of the tug at this time; two major influences being, the condition of her boiler and the fact that Essex and Suffolk water, who had sponsored us by giving us their waste oil to burn, were unable to supply us any more.  In 1994 we decided that we would not be able to run ‘Brent’ again in the foreseeable future and so Ron oiled the machinery and we laid her up.
In 2001, aware that her hull needed attention, we decided that it would be prudent to double the bottom and partially re-plate under the stern.  This work was carried out at Landbreach’s dry dock in Maldon in 2002.  Thus we felt, that by doing this, the safety of the machinery and boiler would be ensured, until such time as restoration could begin.

In regard to safeguarding the future of ‘Brent,’ we had had some negotiations with The Museum of London in 1989, who considered the idea of purchasing her.  A team led by Chris Elmers came for a trip with us, but nothing came of these plans due to funding difficulties.  After this we did not do anything proactive towards her future, although more recently Ron had discussed with Martin Stevens, of ‘The Medway Maritime Trust,’ the possibility of setting up a trust for the preservation of ‘Brent.’

In 2009 Martin, in an advisory capacity, spoke to me about it again, and through his assistance co-trustees were found, Richard Albanese and Richard Seager, and “Steam Tug Brent Trust” was established in 2010. 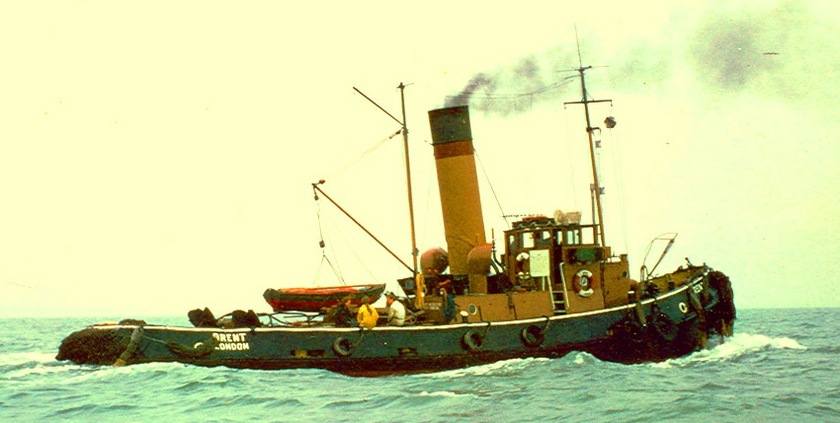